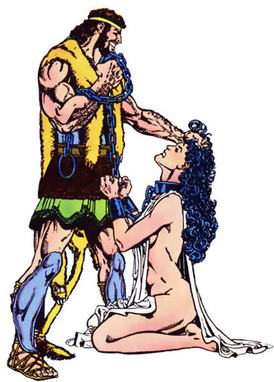 Simply put, this is a character who has been Made a Slave for the sexual desires of others. This happens especially often in Dystopia, The Empire, and the darker versions of Fetish-Fuel Future, either to show how much the world sucks, or, well, just because. In the former kind, the Sex Slave is rarely a protagonist. At best, she's a Damsel in Distress for the hero to rescue. At worst she only exists as a narrative tool to show the audience that this is indeed a No Woman's Land. In the Romanticized Abuse kind, however, she (or he) is usually the protagonist. In that case, expect Property of Love and Freedom from Choice to come along with Happiness in Slavery.

The contrast between some of the more risque aspects of this trope and the Crapsack World environment it usually occurs in can often create Unfortunate Implications. In some works, the slavery can develop into a mutual relationship. Expect Bathe Her and Bring Her to Me, Go-Go Enslavement, and/or a Slave Collar. Compare Slavery Is a Special Kind of Evil.

Unfortunately, this is Truth in Television, although generally quite different from the fetishised fantasy. Forced prostitution

in general amounts to this. Human Trafficking in particular is one of the biggest ways that people are enslaved like this.