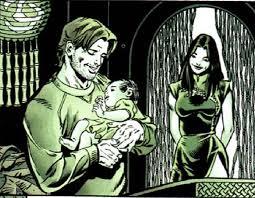 Don't you hate it when you discover you have a secret love child by your Dragon Lady Arch-Enemy?
"All those tragic heroines, I don't want to play them. *operatic voice* 'My man, my man did not come ba-a-a-a-ack... You went to America, you said you'd come baaaaack... And I'm still waiting for your aaaaaass... where you aaaaaaat... you're my babydaddyyyy....you lying mothafuckaaaaa'. I don't want to be in any musical where there's gonna be a helicopter!"
— Margaret Cho
Advertisement:

The white hero (or sometimes villain) discovers he has a hitherto unknown child with an exotic former lover. The hallmarks of an Asian Babymama are as follows:

What separates this trope from a normal interracial relationship is that the Asian Babymama's relationship with the father of her child is rarely shown 'onscreen'; she's usually a footnote in his past.

In the martial arts genre, she exists primarily only for angst and to give birth to a Eurasian child with l33t martial arts skills. She may have some sort of twisted motive (actually depending on the society that person lives in it might be an entirely reasonable and sensible choice) for conceiving her child, such as providing an heir for a powerful male relative or to train to be the perfect killer. Basically, when you combine Exotic Dragon Lady and Secret Pregnancy, you get Asian Babymama. Unfortunate Implications may follow.

This trope largely has its roots in American service men bringing home wives from U.S. wars in Asia. At the time there was a stigma to the servicemen there impregnating hookers and marrying Asian women that were pretty much seen as call girls. In other cases, said service men got the women pregnant and then rotated home, leaving said women and their children to face social stigma (Defiled Forever for the mother and illegitimacy and Half-Breed Discrimination for the child), especially once Vietnam was unified. See also Abandoned War Child.

As those wars are less contemporary now and that stereotype is dying, this trope is becoming less common. Asian brides no longer have the same stigmas and stereotypes attached to them without setting a work back in that time period. As such it's becoming a Dead Horse Trope now. If you do see it invoked nowadays, it'll be the "Globetrotting hero knocks up mistress with an agenda" variety.