Literature / The People of the Black Circle 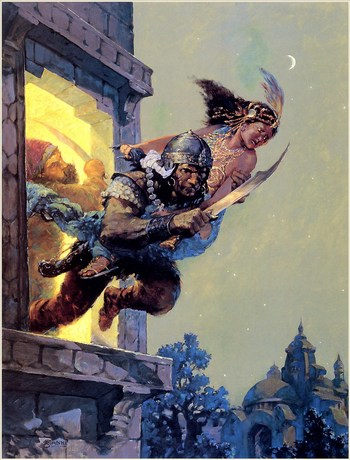 "The People of the Black Circle

" is a Conan the Barbarian novella by Robert E. Howard. Published in three parts, from September to November, 1934. Entire text online here

In the kingdom of Vendhya, the king, Bhunda Chand, is in his death-throes, after having suffered through long days of unholy torments. Though the court's healers and priests can find no answer, his sister, the Devi Yasmina, can deduce the cause all too clearly: sorcery of the foulest kind. Her suspicions are confirmed when, during a moment of lucidity, he babbles to her that the fearful wizards of the Black Circle are drawing his soul away, seeking to rend it from his body and use it to breathe life into some daemonic homunculus. At his behest, she is forced to kill him, and for this she swears revenge.

But the Black Seers of Mount Yimsha are known through all of Vendhya, the wizards feared for their terrible powers and unearthly servitors. As beloved as King Chand was and his sister Yasmina is, no man of the Vendyha could be roused to confront the Black Circle. And so, Yasmina hits on a plan; she has the governor of Peshkhauri, the most northerly province of her empire, nestled in the foothills of the Himelians, capture seven headmen of the tribal barbarians who live beyond, seeking to use them as bargaining chips to force the savage and fearless Afguli to wage war on the sorcerers for her.

In this, she succeeds... but her arrogance costs her, for she is present when the Governor of Peshkauri is visited in the night by the current chieftain of all Afguli; Conan, having striven to make of himself the most powerful raider in all of Afghulistan. Realizing he has a golden opportunity, Conan abducts Yasmina and flees for the hills, planning to ransom her back in return for the lives of his headmen.

But Conan and Yasmina both are betrayed; Yasmina's maidservant, Gitara, secretly goes to her lover; the sorcerer Khemsa, an agent of the Black Circle who had been responsible for King Chand's death. The Circle's original plan was to support the ambitions of King Yezdigerd to conquer Vendhya and take Yasmina for his harem, but Gitara, greedy and ambitious, fills her lover's head with ideas of instead betraying both sides to make themselves emperor and empress instead. Madly in love with her, and carried on by her enthusiasm, he goes to the prison and slays the Afghuli headmen before transporting himself and Gitara into the hills in pursuit of Conan and the Devi, determined that they must both die.

Behind them, the Hyrkanian agent Kerim Shah seeks to turn this turmoil to his king's advantage.

Conan and Yasmina take shelter for the night in the village of the Khurum Wazulis, another hill-people whose chieftain, Yar Afzal, owes Conan a life-debt. However, they are forced to flee for their lives after Khemsa's magic slays Yar Afzal and goads the Wazulis into a vengeful fury. Stopping only to buy the clothes from a Galzai hillwoman in order to better dress Yasmina for the trip, they continue making their way into the mountains, only to be attacked by Khemsa and Gitara.

Conan and Khemsa's duel is short-lived when four of the Black Seers arrive. Angry by their student's disobedience, they try to strike him dead with the power of their wills alone, only to be stymied; stronger than they had realized to begin with, Khemsa's love for Gitara is giving him the strength to fight them in order to keep them safe. The moment they realize this, the Black Seers turn their power on Gitara, who is compelled to leap to her death. Before Khemsa can recover from this, they cause an avalanche that sweeps him off the ledge and then abduct Yasmina, leaving Conan behind.

At first just glad to be alive, Conan turns and heads back down the trail, only to be met by his own Afghulis - who turn on him in a fury for having failed to save the lives of their headmen. Forced to flee, Conan turns back up the trail, only to encounter the mangled wreck of Khemsa. The sorcerer clings to life long enough to gasp out some vital clues to defeating the Black Seers to Conan, gives him an enchanted girdle that will protect him from the Seers' sorcery, and then dies.

Thoroughly annoyed with everything, Conan decides to go to the Black Seers' stronghold on Mount Yimsha and recover the Devi. Along the way, he encounters Kherim Shah and a small band Hyrkanian warriors, the last survivors of a band that was ambushed in a pass elsewhere. Driven by a mutual goal, the two forces agree to team up to fight the Seers.

After many battles that sees Kherim Shah's men, and the Hyrkanian himself, slain by sorcerous defenses, Conan manages to kill all of the Black Seers and rescue Yasmina. Heading down from the hills, they discuss where to go from here; ultimately, Yasmina returns to her kingdom, although Conan claims he will one day collect her ten thousand gold piece ransom from her palace in Ayodhya, though Yasmina rebuts that she will instead meet him on the shores of the Jhumda with a hundred thousand men first.