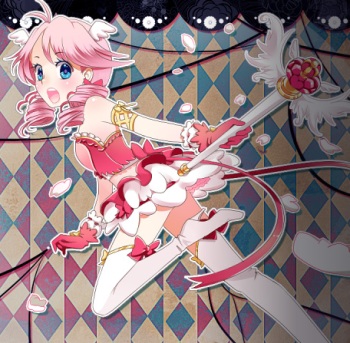 A cute and sparkly game by Hanako Games about dressing up a pretty little princess and preparing her to become a great queen...
Advertisement:

...and watching her be assassinated.

Elodie, the 14-year-old crown princess of Nova, is suddenly yanked back home from boarding school when her mother dies under mysterious circumstances. As the next in line to the throne, Elodie must survive until her fifteenth birthday before she can be legally crowned as Queen. Unfortunately, she is surrounded by people who have their own plans for her, most of which involves her untimely demise.

Long Live The Queen is a viciously evil Ren'Py-based game where you, as a woefully-unprepared princess, must manage Elodie's weekly schooling to teach her the skills she needs while everything is trying to kill her. Will you nurture her into a cruel warlord who executes anyone and anything that could pose a threat? Or a Magnificent Bitch wielding an extensive intelligence network in one hand and a web of alliances and funding accounts in the other? Or maybe even a badass Magical Girl Warrior with a personal attack falcon?

The game is largely skill-based: Elodie's weekly classes raise her skill levels, and those levels are checked against a static target number to see if she passes a challenge. Training up a category of associated skills unlocks new clothes for Elodie that boosts those skills even further. You must also manage Elodie's mood carefully, as it dictates how willing she is to learn certain skills. (For example, she is far more receptive to Conversation lessons when she is Cheerful instead of Depressed.)

It sounds simple, but Long Live The Queen just loves throwing you curveballs by suddenly checking for skills you never thought you would need. (All your points in Naval Strategy won't count for anything if you fall off the Crow's Nest!)

You can buy this game on Hanako Games' website, Steam and GOG.com. In 2022 a slightly-updated version of the game was released for Nintendo Switch, Xbox, and Playstation with translations into multiple languages.

As per The Wiki Rule, there is an extensive Wiki

that doubles as a comprehensive walkthrough.

Spoiler Warning: While we'll try to mark major spoilers, just about everything in the game is a spoiler to some degree. Read this page with caution if you want your play experience to be unspoiled.