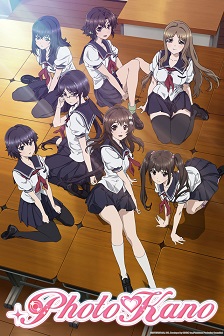 Kazuya Maeda, a mild-mannered high school sophomore coming to the end of a very average summer break, receives a digital single lens reflex camera as a gift from his father. His nerdy fascination with its design soon turns to wonder when he realizes this little gadget could really give his social life a shot in the arm!

Photo Kano (フォトカノ Foto Kano, lit. "Photo Girlfriend") is a Japanese Dating Sim video game developed by Dingo and Enterbrain, the latter being the same studio behind Kimikiss and Amagami, making this its Spiritual Successor. It was released for the Sony PlayStation Portable on February 2, 2012, but received an Updated Re-release for the Sony PlayStation Vita on April 25, 2013. It also got an Animated Adaptation that aired as a part of the Spring 2013 Anime season, using a similar omnibus format the Amagami SS adaptation had.

The Anime may be watched legally on the Crunchyroll