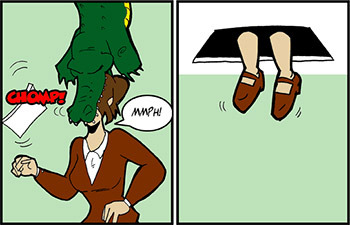 Not the pick-me-up one usually has in mind.

Our heroes are patrolling around completely alert but somehow miss the monster on the Ceiling...

Cousin to Neck Lift, this is where a character is lifted up by said monster. Usually, the character will be unnaturally silent when this happens, and often they will be dropped moments later very dead, and possibly disemboweled. This often happens to the last person in a group while the main characters aren't paying attention.

It seems every monster worth its salt has Super Strength and a knowledge of Pressure Points.

Compare and often overlaps with Kidnapped from Behind, Behind the Black, No Peripheral Vision, and Failed a Spot Check. May also be preceded by a *Drool* Hello.

If it's a bird doing the kidnapping, then it's Kidnapping Bird of Prey.