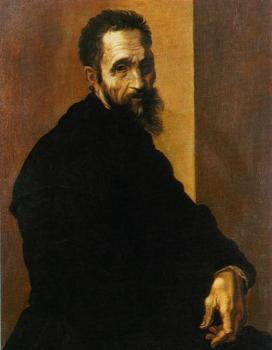 The world's most famous ceiling painter. Not much of a party dude.
This portrait was painted by Jacopino del Conte in 1540, when Michelangelo was 65 and working on the Sistine Chapel.
"I saw the angel in the marble and carved until I set him free."
Advertisement:

He is widely considered to be an artistic genius in all crafts and together with Leonardo da Vinci and Raphael Sanzio one of the greatest masters of The Renaissance. Already a high profile and sought after celebrity during his lifetime, he became the first artist to have his biography published while he was still alive.

David, the Pietà, Moses and the ceiling of the Sistine Chapel in the Vatican count among his most famous works. The latter two were ordered by Pope Julius II among a number of ambitious projects he entrusted Michelangelo with, and are constantly referenced and parodied in popular culture — see Sistine Steal and Pietà Plagiarism. Michelangelo was also highly regarded as an architect, designing St. Peter's Basilica, but the project would only be finished after his death.

Probably unsurprising given the body of his works, Michelangelo was a devout Catholic. According to his apprentice, Ascanio Condivi, Michelangelo was such practically ascetic: he ate as was necessary and without pleasure. A biographer, Paolo Giovio, said he lived so squalidly that his pupils gained no prominence from associating with him - which makes a lot of sense considering he was a rather solitary person.

Not unlike Leonardo da Vinci, the topic of his sexuality is of much debate: His aforementioned apprentice claimed he was like a monk in his chastity, so his poetry is most commonly studied for this topic of which there is a fair amount of expressing love that are targeted toward men (the seemingly homoerotic nature of them even led his grandnephew to changing the poems' pronouns to female). Tommaso dei Cavalieri was one who reciprocated his passion and the two remained devoted to each other until Michelangelo's death. Despite all this, it would probably be remiss to simply describe Michelangelo as being homosexual since Vittoria Colonna was a woman who also had a similar mutual devotion to Michelangelo with the two regularly exchanging sonnets until she died and there doesn't seem to be much to suggest any of Michelangelo's relationships were anything more than platonic.

Also inspired the name of one of the Teenage Mutant Ninja Turtles.

Works made by Michelangelo with their own TV Tropes pages include: