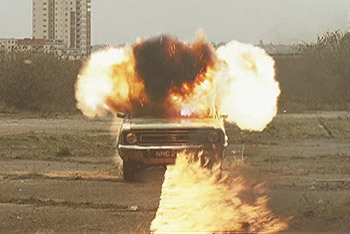 A vehicle is damaged and leaking fuel. The hero (and it is almost always the hero) ignites the trail of fuel, causing a line of flame to streak after the fleeing vehicle. The fire catches up to the vehicle, ignites the fuel tank and causes the vehicle to go up in an impressive fireball.

Compare Powder Trail. Also remotely related to the one of worst problems with Stealth in Space.

Nothing to do with a lack of a paper trail

where there ought to be one, or with the vapor trails from an airplane's wings. Also not to be confused with either the Rush album or the Crystal Method song entitled Vapor Trails, or the Shoot 'em Up also named Vapor Trail.