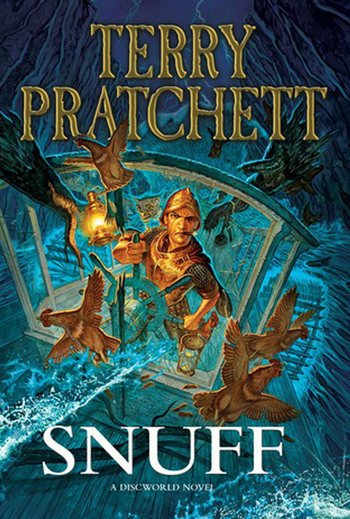 According to the writer of the best selling crime novel ever to have been published in the city of Ankh-Morpork, it is a truth universally acknowledged that a policeman taking a holiday would barely have had time to open his suitcase before he finds his first corpse. And Commander Sam Vimes of the Ankh-Morpork City Watch is on holiday in the pleasant and innocent countryside, but not for him a mere body in the wardrobe, but many, many bodies and an ancient crime more terrible than murder. He is out of his jurisdiction, out of his depth, out of bacon sandwiches, occasionally snookered and occasionally out of his mind, but not out of guile. Where there is a crime there must be a finding, there must be a chase and there must be a punishment. They say that in the end all sins are forgiven. But not quite all...
Advertisement:

The 39th Discworld novel, published after I Shall Wear Midnight. His Grace Commander Sir Samuel Vimes of the Ankh-Morpork City Watch cheerfully volunteers for a holiday along with his family in that most dreaded of locations: the countryside. There are always things rustling through the undergrowth, you can never be sure that someone isn't hiding behind that hedge, and there are no streets. Or are there?

His wife entertaining the local gentry and his son becoming obsessed with poo, Vimes goes for a walk, visits the local pub, gets into a fight with a blacksmith, and discovers that a murder has been committed. No one cares - after all, the victim was just a goblin. But to Vimes, a crime is a crime and there must be a punishment. However, he has no jurisdiction, no body, and no clues. His only allies are his wife and his Battle Butler. Then the local police, who have jurisdiction, turn up to arrest him. And his wife still won't let him eat bacon sandwiches.

Continuing with themes introduced in Unseen Academicals, Snuff heavily deconstructs Fantastic Racism. In contrast to the usual Watch novels this is a more Vimes-centric tale à la Night Watch Discworld, although the rest of the Watch do feature sporadically throughout the novel. Nobby Nobbs gets a goblin girlfriend. The second Discworld novel not to feature Death as a character.

Preceded in the series overall by Unseen Academicals, and in the Watch series by Thud!. It is followed by Raising Steam.