Alliance with an Abomination 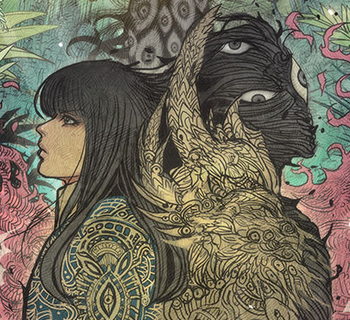 Not all cosmic entities hate humans arbitrarily. At the very least, some of them might recognize their potential, and sometimes they might even develop a genuine fascination with them. When a supposed Eldritch Abomination sides with a human (or any manner of "lower being", for that matter), that is this trope. This will most likely be done by a Badass Normal or Badass Abnormal.
Advertisement:

Of course, with an ally so high on the Super Weight scale, the character risks becoming a Invincible Hero or Villain, so for the plot to move forward, it is necessary that the alliance be either brief, strained, conditional, rivaled (meaning there is an enemy of roughly equal or greater power to contend with), or has some bad consequences. This may be done through a Deal with the Devil (with all that entails), but not necessarily.

Compare and contrast Did We Just Have Tea with Cthulhu?, where a normal and an Eldritch Abomination associate casually or even friends, and Did You Just Romance Cthulhu?, where this goes beyond a mere alliance/friendship. Compare Bargain with Heaven for dealing with more obviously "heavenly" entities. May result from Summon Bigger Fish, or from a combination of Did You Just Punch Out Cthulhu? and Defeat Means Friendship. Distinct from Pals with Jesus in that this refers to a team with an actual task to fulfill. If the hero is abominable themselves, they're a Horrifying Hero.

This trope only applies to the being allying itself with a specific individual or team of individuals. And it has to be out of respect or mutually beneficial. If the "lower being(s)" achieve this partnership by manipulating a weakness, it's Did You Just Scam Cthulhu?. Contrast God Was My Copilot.