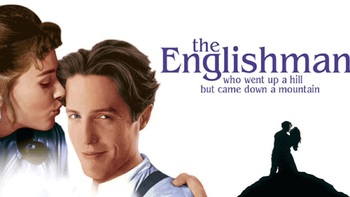 The Englishman Who Went Up a Hill But Came Down a Mountain is a 1995 British historical comedy/drama directed by Christopher Monger, starring Hugh Grant, Tara Fitzgerald, and Colm Meaney.
Advertisement:

In 1917, two English cartographers come to a small Welsh village to measure the local mountain, Ffynnon Garw, for the official British maps. The villagers are very proud of Ffynnon Garw ("the first mountain in Wales") and are rather upset to learn that that it's just under the 1000 feet required to be considered a mountain, and thus will not appear on the map.

Quickly, the villagers hatch a plan to add a mound to the top to bring it up to the requirement, while conspiring to keep the cartographers in town long enough to measure it again.