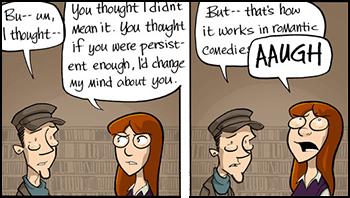 At its core, this trope transpires when a character's logic and train of thought run on Romance Novel conventions.

In its most severe cases, one character is totally in love with another and the idea of confessing his/her feelings sends said character directly into full-blown delusions of grandeur about returned affections. The character tends to think of romance in completely idealized terms, and their train of thought plays out like the summary of a category romance novel.

More innocuously, the inverse thoughts can lead to Oblivious to Love, because the Love Interest does not conform to the romance novel standard, it wasn't Love at First Sight, or any other failure.

Marks of this in animation include an Art Shift, a misty border if not a misty filter over the entire frame, symbolic surroundings (color background, roses, fireworks, etc), and a liberal coating of Bishie Sparkle for the characters to stare at one another adoringly through. Arguably it is much more fun to see characters thinking like romance novels in animation than anywhere else if for no other reason than these overblown delusions.

In live-action works or literature, it is more common for the mental image to be implied while the character rambles soliloquizes about how the love scene will turn out, or for the other characters' actions to reveal their Romance Novel idealism.

Subtrope of Wrong Genre Savvy. See also Daydream Surprise for the delusion itself. Often overlaps with In Love with Love. Compare to Imagine Spot, Dream Sequence, and Gilligan Cut.