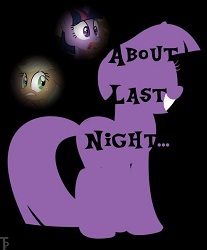 Turns out, an Accidental Marriage can have long-reaching consequences.
Advertisement:

About Last Night is a My Little Pony: Friendship Is Magic fanfic by Darth Link 22 of The Nuptialverse fame.

A few months after the events of Super Speedy Cider Squeezy 6000, Applejack decides to officially integrate the others into her family with an Apple tradition: a long night of cider drinking. The next morning Applejack wakes up... in Twilight's bed... with a gold band on her hoof... and a legally binding document on the bedside table...

The story has been completed, and can be found here

. Following the death of Darth Link 22, the story has since become a Dead Fic.

Also has a piece of Recursive Fanfiction, About Last Night: A Deleted Scene

This fanfic series provides examples of: