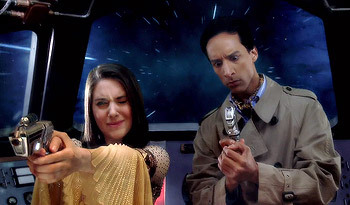 Blorgons? In this sector?! Well, this mission has gone pear-shaped indeed!
Advertisement:

When the biology final exam is unexpectedly postponed, the study group finds themselves with three hours of free time on their hands. While most of the study group go to lunch, Annie convinces Abed to let her spend some time with him in the dreamatorium instead, as a cover for convincing Troy and Britta to go on a date. What starts as an innocent simulation of Inspector Spacetime, however, degenerates into an argument between Annie and Abed, which in turn eventually results in Abed experiencing a minor breakdown when Annie tampers with the Dreamatorium's 'engine'. In order to snap him out of it, Annie must travel through an imaginary hospital populated by Abed's impressions of his friends to find him, which in turn gives her some insight into herself, her friends, and what makes Abed tick.