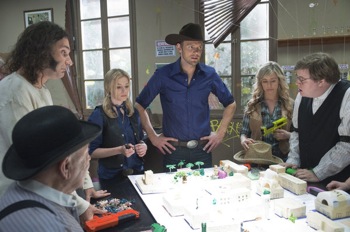 It was a dark time for Greendale...
"Greendale students: I understand you've unified and intend to draw this game out. Well, if it's a war you want, it's a war you will lose. City College is stronger, faster; our sperm counts are higher, even in our women. Resistance is as pointless as your degrees."
— Dean Spreck

Greendale is at war. The school has been all but destroyed by its own students, all playing paintball to win the $100,000 prize offered by Pistol Patty's Ice Creamery. But "Pistol Patty" is really Dean Spreck of City College, who has unleashed this scheme to destroy the Greendale campus and has employed ringers such as the Black Rider and his stormtrooper-esque White Clones — all of whom have been enrolled at Greendale for weeks — to ensure he doesn't have to pay out the prize. The only hope for saving the school is for one of its students to win the prize and donate it to the school, so the Study Group assembles a ragtag bunch of misfit students to fight back, stop Dean Spreck and save Greendale Community College.

The Community episode "For A Few Paintballs More" provides examples of: