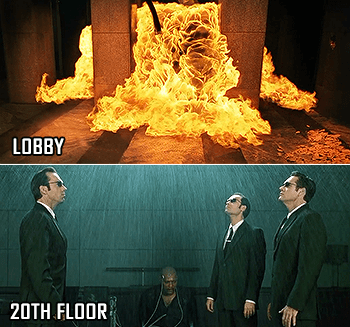 When someone needs to create chaos in a building or just get everyone to leave, they trip the sprinkler system. Just apply a lighter flame, or perhaps a bullet, to one fire sprinkler, and all of the sprinklers on that floor—or even in the entire building—will suddenly kick off. Everyone gets drenched, and there's a mass exodus from the building. Sometimes, pulling the fire alarm will activate the sprinklers as well. This is because Hollywood engineering is based on the Rule of Cool and helping advance the plot, not reality.

In the real world, only some sprinkler systems work like this—usually in buildings with a very high fire risk. While some neighboring sprinklers could go off due to the water hammer effect, most modern systems use sprinkler heads that have their own individual trigger (usually a glass tube that breaks when it gets too hot, or in older systems a lead slug that melts at a low temperature), thus limiting the water delivery only to the location of the fire.

There are two simple reasons: 1) Where cisterns are used, the amount of water available to put out the fire is limited, so naturally you want as much of that water as possible to go where it will do the best job putting out the fire before the cistern runs dry and 2) Spraying water on things tends to damage them, so you only want to do that where it's truly necessary. Where sprinklers are connected directly to the main water supply, if they all went off simultaneously there wouldn't be enough pressure for the system to work adequately without much larger and more expensive pipes throughout the entire building. Additionally, activating the fire alarm system (via a pull station or smoke/heat detector) will not trip a sprinkler system, although sprinkler systems can trip a fire alarm system if they are interconnected with each other (and they usually are).

Fire suppression systems that flood an area with high-expansion foam (such as found in aircraft hangars) or inert gases are normally activated this way, but this is because these systems will not only extinguish the fire but also kill everyone in the room, so for safety reasons are supposed to be manually activated after confirming that everyone is out.

This trope is so prevalent in the media that people now expect sprinklers to go off all at once. Businesses are reluctant to install sprinkler systems because they think even the smallest fire will cause enormous water damage. This trope may also have been responsible for a lot of real-life criminals drenching their—and only their—jail cell.

Also, while sprinklers in media spray little bits of clear water, a real sprinkler system—which typically sits for years without use and which is designed to put out or stop the spread of fires as fast as possible—dumps between twenty and one hundred gallons (80-400 liters) of filthy, stagnant water per sprinkler per minute—assuming they work at allnote  As a sprinkler system gets older, it decays, especially if it doesn’t get tested and serviced regularly, which costs money. For the first ten to twenty years or so, they can be expected to work fine. After that, it depends on maintenance and water quality. Not exactly the best way to spend your day. Compare that to a simple shower, which puts out about one-and-a-half to two gallons (six to eight liters) per minute.

A Sub-Trope of Reality Is Unrealistic. Similar to Hydrant Geyser. Script-Reading Doors are a similar case of an appliance that does whatever the writer wants. Usually occurs as a result of a Fire Alarm Distraction.