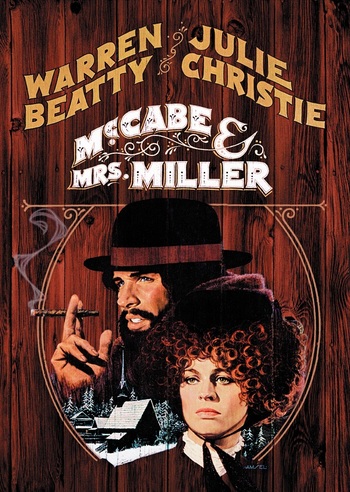 Not your typical Western protagonists.
Advertisement:

McCabe & Mrs. Miller is a 1971 Western film directed by Robert Altman. Altman himself called it an "anti-Western", as it ignored or outright subverted a number of the usual genre conventions. The film at heart is intended as a more realistic portrayal of life in the Old West; something which one reviewer remarked would be like what a documentary filmmaker might make if he traveled back in time to the era and filmed people going about their daily lives. It's also based on the novel McCabe by Edmund Naughton.

Starting with being set in the relatively wooded northwestern United States as opposed to the orange deserts of the southwest as most westerns are; professional gambler John McCabe (Warren Beatty) turns up in the tiny town of Presbyterian Church (named after its only substantial building) one day at the start of the twentieth century, and quickly has the entire town under his thumb. He establishes a brothel with three prostitutes purchased from the nearby town of Bearpaw. Not long afterwards, opium-addicted brothel madam Constance Miller (Julie Christie) turns up in town herself and convinces McCabe that she can do a better job running the brothel than he can, and that she will share the increased profits with him if he lets her do so. He accepts. The two flourish, but then a pair of agents from the Harrison Shaughnessy mining company in Bearpaw arrive seeking to buyout McCabe's business. He refuses, trying to drive the price up, but they lose patience and leave town. Miller warns him that the company has a reputation for sending assassins to kill those who won't sell. Sure enough, three gunslingers arrive shortly after.

The film seeks to defy as many of the genre's clichés as possible, being one of the most notable "revisionist Westerns". Life in town is portrayed as dirty and unadventurous, and McCabe eventually becomes just an obstacle to be shot out of the way by a company wanting to buy property for cheap, with the movie making clear what happens when "little businesses" cross the path of big ones, as well as the role of small middle-of-nowhere frontier towns in society's bigger picture. As mentioned above, it replaces the classic sunny desert setting with a bleak snow-filled landscape and drives the point home with a soundtrack by none other than Leonard Cohen. Needless to say, it is gloomy and cynical, but considered by many to be one of the finest movies of The '70s.