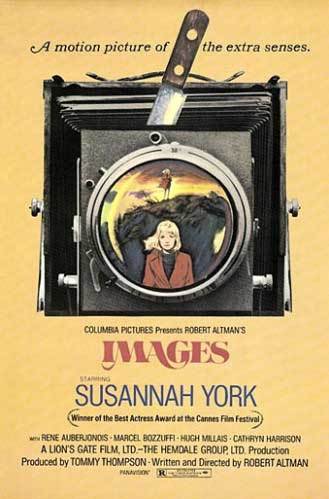 "I'm not gonna be able to finish this puzzle. There's too many pieces missing."
Advertisement:

Images is a 1972 Psychological Thriller film written and directed by Robert Altman.

Cathryn (Susannah York) lives in Ireland with her American husband Hugh (René Auberjonois). She's writing a children's book while he's frequently away on business. When he's home, they socialize with their old friend Marcel (Hugh Millais) and his teenage daughter Susannah (Cathryn Harrison).

Any attempt to explain the story beyond that runs into some complications, because this is a major Mind Screw of a film. Cathryn's relationship to reality isn't very close to begin with, and it gets more and more tenuous as the film goes along. For example, she keeps encountering René (Marcel Bozzuffi), an old lover who may or may not be dead. As events grow more tense, Cathryn is forced to confront her personal demons as she finally sorts out reality from hallucination.

One of the few films Altman wrote by himself, it remains a little-seen but fascinating curio in his vast filmography.