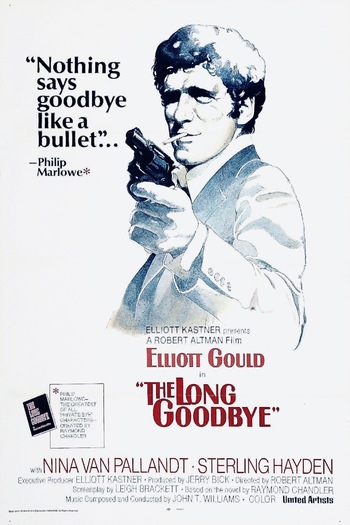 The Long Goodbye is a 1973 film directed by Robert Altman and starring Elliott Gould as detective Philip Marlowe. It was adapted from Raymond Chandler's 1953 novel of the same name by Leigh Brackett (who had earlier co-written the most famous film version of Chandler's The Big Sleep).

Marlowe's old friend Terry Lennox comes by in some sort of trouble, asking for a ride to Tijuana, which Marlowe provides. This winds up getting Marlowe in hot water with the LAPD, when it turns out that Lennox's wife Susan was murdered and Terry is the prime suspect. Meanwhile, Eileen Wade (Nina van Pallandt) hires Marlowe to find her missing husband, the noted author Roger Wade (Sterling Hayden)—and it turns out that the Wades' Malibu home is right down the beach from the Lennoxes'. Things get even more complicated when crime boss Marty Augustine (Mark Rydell) comes to Marlowe's apartment demanding $355,000 that Lennox was supposed to deliver but instead has absconded with.

A pre-stardom Arnold Schwarzenegger has a non-speaking part as a Mook. The role of Terry Lennox is played by Jim Bouton, a former Major League Baseball pitcher far better known for his famous baseball memoir, Ball Four.