Film / I Love You to Death 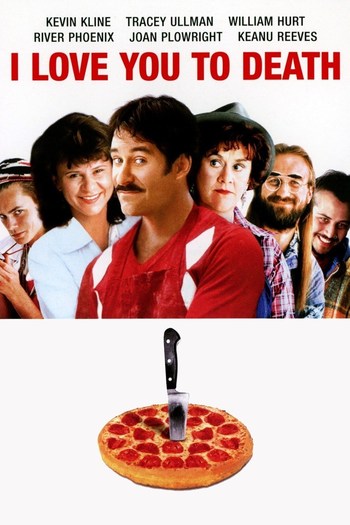 Joey Boca (Kline) lives with his wife Rosalie (Ullman) in Tacoma, Washington. They earn a modest living running a pizzeria, with Joey making a few bucks on the side as a handyman. Unfortunately, money's not the only thing Joey is getting on the side. Rosalie finds out that he's been cheating on her with several of his clients. Devastated, she vows to get back at him. As a devout Catholic, divorce is out of the question. Murder, on the other hand ...

Hilarity Ensues when Joey proves harder to kill than anticipated, while remaining blissfully unaware that anyone is trying to kill him. Rosalie is aided in her attempts by her tough-as-nails Yugoslavian mother Nadja (Plowright), devoted busboy with a crush Devo (Phoenix), and drug addicts-turned-impromptu hitmen Harlan (Hurt) and Marlon (Reeves).