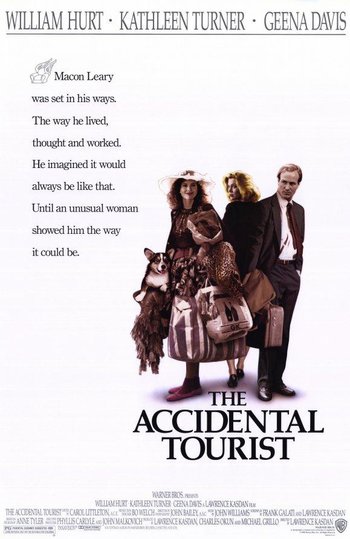 The Accidental Tourist is a 1988 American drama film starring William Hurt, Kathleen Turner, and Geena Davis. It was directed by Lawrence Kasdan and scored by John Williams. The film's screenplay was adapted by Kasdan and Frank Galati from the 1985 novel of the same name by Anne Tyler.

Macon Leary (Hurt) is a Baltimore writer of travel guides for reluctant business travelers. His marriage to his wife Sarah (Turner) is disintegrating in the aftermath of the murder of their twelve-year-old son. Sarah eventually leaves Macon, moving out of their house and into an apartment. After he falls down the basement stairs and breaks his leg, Macon returns to his childhood home to stay with his eccentric siblings.

Macon is pursued by Muriel Pritchett (Davis), an animal hospital employee and dog trainer with a sickly son. Macon eventually hires Muriel to put his dog through much-needed obedience training. Although Muriel at first seems brash and unsophisticated, Macon finds himself slowly opening up to her and trusting her, and he spends most nights at her house, which makes things complicated when Sarah becomes aware of the situation, and she decides they should move back together.

The book and film adaptation contain examples of: