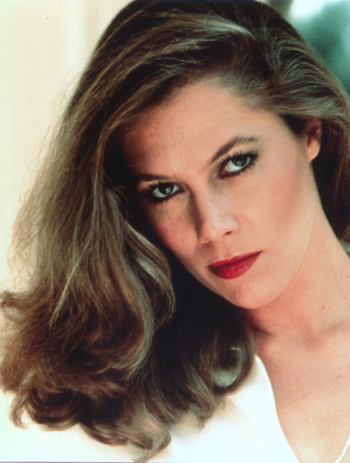 "I often play women who are not essentially good or likable, and I often go through a stage where I hate them. Then I end up loving and defending them."
Advertisement:

Turner also guest-starred on the sitcom Friends as Chandler Bing's father, Charles Bing,note Through the show's run, it's not really clear whether Chandler's dad is supposed to be a drag queen, a male crossdresser, or a transgender woman. At the time the show was written, all of these things were seen as one and the same, before transgender people became better understood and more accepted. One of the creators, Mara Kaufman, has gone on record saying she was meant to be a trans woman (and that she regrets the jokes in hindsight). and in the third season of Californication as Sue Collini, the jaded, sex-crazed owner of a talent agency. Known for her distinctive deep, husky voice, Turner has also done considerable work as a voice actress, namely as Jessica Rabbit in Who Framed Roger Rabbit (1988, uncredited), as well as Monster House (2006), and the television series The Simpsons and King of the Hill.

In addition to film, Turner has worked in the theater, and has been nominated for the Tony Award twice for her Broadway roles as Maggie in Cat on a Hot Tin Roof and as Martha in Who's Afraid of Virginia Woolf?. Turner has also taught acting classes at New York University.