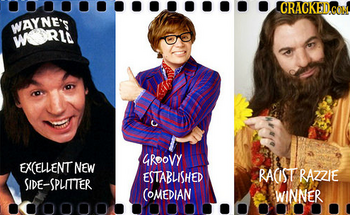 Mike Myers: From rockin' guy to groovy spy to why...just, why?!
"If this doesn't kill your career, nothing will."
— Maria Shriver (to her then-husband Arnold Schwarzenegger on the premiere of Red Sonja)
Advertisement:

The latest blockbuster complete with an A-List star has just hit the theaters nationwide. They've done the usual talk show circuit hyping the film. The studio's marketing department spared no expense advertising it. Then the numbers come in...

...and the film has completely and totally bombed.

As it turns out, the studio didn't allow advance screening of the film for critics, and for good reason. Very few of them are giving the movie a positive review. Word of mouth is even worse. And as they say in Hollywood, you're only as good as your last role. Perhaps the role wasn't the right fit, or maybe the person's lack of actual acting skill has finally caught up to them. Regardless, the star's time on the A-List (or possibly even the B-List) has come to an end. If they're lucky, they may find another Star-Making Role, but more often than not, the fallen star gets trapped in a permanent Never Live It Down and ends up fading into obscurity, never to reclaim the glory they once had. Tabloid fodder could also cause the adoring media to turn against them, often dismissing their latest project out of hand. If they have an out-of-control private life it makes it worse for the actors in question. This can also be subverted if the actors are Critic-Proof and/or have a Controversy-Proof Image.

Compare with Creator Killer for those behind the camera, and Role-Ending Misdemeanor for when it happens due to off-camera foibles. Can sometimes coincide with Franchise Killer or even Genre-Killer in the most extreme circumstances. Contrast with Star-Making Role and Career Resurrection.

A good number of these examples have been Vindicated by Cable or garnered Cult Classic status.

Examples with their own sections: