Western Animation / Norm of the North 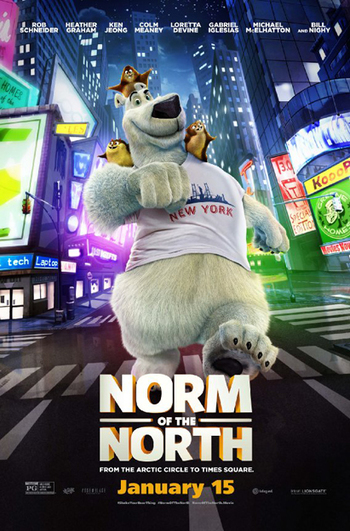 Norm of the North is a 2016 CGI-animated film distributed by Lionsgate, produced by Splash Entertainment, and animated by India's Assemblage Entertainment.

When Norm (Rob Schneider), a polar bear with the gift of talking to humans, discovers that tourists are invading his home and interfering with the lives of dozens of other animals, he and three lemmings travel to New York City in order to convince the humans that they shouldn't intrude on their home. While there, they find out that a company run by Mr. Greene (Ken Jeong) is looking for a new mascot. Using his special gift, Norm decides to become the company's mascot in an attempt to convince the humans that they should save the Arctic instead of tearing it down.

Norm of the North provides examples of:

Norm of the North sequel

Norm of the North sequel