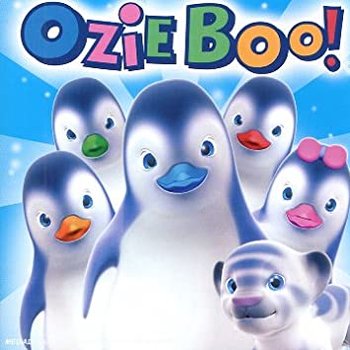 Ozie Boo! is a Chilean All-CGI Cartoon Preschool Show that premiered on September 2, 2006, airing on TiJi, France 5, and Playhouse Disney France. The first season is comprised of 52 2-minute episodes, while the second and third seasons (52 and 26 episodes respectively) aired on Canal J, and was expanded to a length of 7 minutes. In the United States, the series was released on DVDs, three volumes overall.
Advertisement:

The series starts the Ozie Boos, five adorable penguins named Fred, Ed, Ned, Ted, and Nelly, that live somewhere in Antarctica. Like most preschool shows, its mostly a Slice of Life, though there are few recurring baddies that appear in certain episodes.

In 2014, a Spin-Off series entitled Ozie Boo! Save the Planet started airing, with 78 4-minute episodes. Currently, the series can be streamed on Prime Video

in English. Episodes of the original were uploaded by the official YouTube channel here