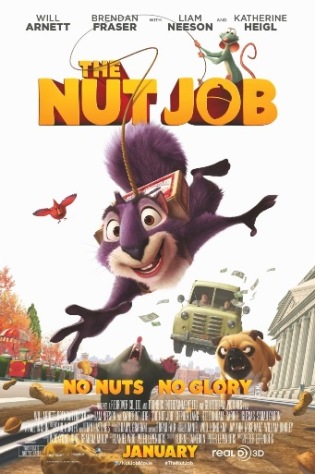 Get ready to go nuts!
Advertisement:

The Nut Job is a 3D computer-animated film released in North America on January 17, 2014 by Open Road Films.

The movie follows the adventures of Surly, a squirrel (who only looks out for himself) who is banished from the park he lives in after he accidentally destroys the other animals' food supply for winter after one of his many thefts goes awry. Forced to survive in the city, he and his rat friend Buddy come across a nut shop and plan a heist of epic proportions, even if it means getting the other park animals to help out before the winter weather arrives. Elsewhere, the owners of the nut shop are planning their own heist: to rob the bank across the street. It's a race against time to see who can pull off their heist first.

Although it was critically blasted (it is one of the worst-reviewed animated movies with a paltry 10% Rotten Tomatoes score), its low budget and relatively strong box office returns made the film a big enough success for a sequel to be scheduled for August 11, 2017, called Nutty by Nature.

Another thing: This isn't the only animated film to use the voices of Will Arnett and Liam Neeson to be released within the first two months of 2014.

Tropes from The Nut Job: