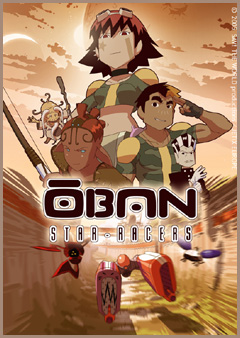 Every 10,000 years, teams from all over the galaxy are gathered by the mysterious Avatar to compete in the Great Race of Ōban, a race with much more at stake than just honor or prize money. According to legend, the winner is awarded the Ultimate Prize, which is rumored to grant any wish; from large-scale destruction to, perhaps, the resurrection of a loved one. Some want it for glory, others as a means of galactic conquest. However, the true nature of the Prize is shrouded in mystery, and things are not what they appear to be...

Eva Wei is caught in the middle of it all while trying to find her father, who had abandoned her after the death of her mother. Under the name of "Molly", she follows her dad's racing team to the heart of the galaxy, where they take part in the Great Race. Having learned of the Ultimate Prize, she hopes to win it to bring back her mother and put her family's life back together.

Deciding working for another company would not give him the creative control he needed, creator Savin Yeatman-Eiffel founded his independent own animation studio, spent years raising funds and years more perfecting the animation in cooperation with Japanese studios. Yeatman-Eiffel worked hard to secure the best talent available from both France and Japan, wrote the scripts for all twenty-six episodes in several languages and was personally involved in every level of the project, sparing no expense and spending years polishing the final result to a mirror shine. Start to finish, almost a decade.