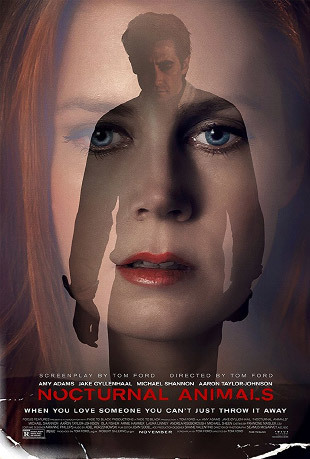 Nocturnal Animals is a 2016 psychological thriller written and directed by fashion designer Tom Ford (A Single Man), based on the 1993 novel Tony and Susan by Austin Wright.

Susan Morrow (Amy Adams) is a Los Angeles-based art gallery owner stuck in an ailing marriage with her husband Hutton (Armie Hammer), who seems more interested in his occupational dealings than repairing their relationship. The morning Hutton leaves for a business trip, she receives a proof copy of a novel called Nocturnal Animals by her ex-husband Edward Sheffield (Jake Gyllenhaal).

In the story, Tony Hastings (also Gyllenhaal) is a Texan man roadtripping with his wife Laura (Isla Fisher) and their daughter India, when they're assaulted by a trio of hoodlums led by Ray Marcus (Aaron Taylor-Johnson) intent on terrorizing him. While Tony makes it out of the ordeal alive, Laura and India are raped and murdered by the men. With the help of Detective Bobby Andes (Michael Shannon), Tony works to bring his family's murderers to justice, even if he loses his own life in the process.

While reading the novel, Susan has flashbacks of her time with Edward, ultimately agreeing to see him again upon finishing the book.

Also starring Laura Linney, Jena Malone, and Michael Sheen in minor roles, Nocturnal Animals is the second film by Ford, who previously wrote and directed the adaptation of novelist Christopher Isherwood's A Single Man, for which Colin Firth received an Oscar nomination in the Best Actor category.