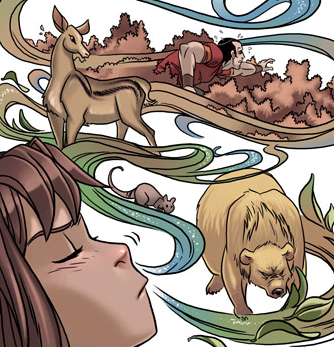 How does she NOSE that?
"You can't fool THIS nose!"
— Wolverine, X-Men: The Animated Series
Advertisement:

They Have the Scent! may come into play.

The werewolf is likely to have them, along with other canine or lupine characters.

They are a particular danger to those with a Secret Identity.

May be a form of Charles Atlas Superpower. Often used to handwave the Scarily Competent Tracker and sometimes Kung-Fu Clairvoyance as well. Detecting blood may make them the Violence Detector. If food is involved, see Follow Your Nose. Nose Tapping may be used to indicate that they do know. If this ability is inherent in one's species, it's a case of Bizarre Alien Senses. See Visible Odor when the smell trace is made visible to the audience.

DuBois Sniffs Out the Animals

DuBois Sniffs Out the Animals