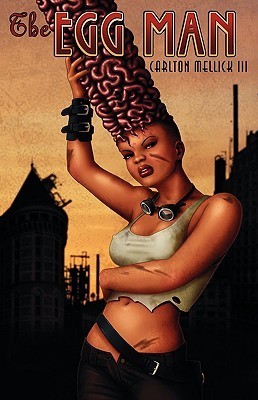 It is a survival of the fittest world where humans reproduce like insects, children are the property of corporations, and having a ten-foot tall brain is a grotesque sexual fetish.
Advertisement:

Lincoln has just been released into the world by the Georges Organization, a corporation that raises creative types. A Smell, he has little prospect of succeeding as a visual artist. But after he moves into the Henry Building, he meets Luci, the weird and grimy girl who lives across the hall. She is a Sight. She is also the most disgusting woman Lincoln has ever met. Little does he know, she will soon become his muse.

Now Luci's boyfriend is threatening to kill Lincoln, two rival corporations are preparing for war, and Luci is dragging him along to discover the truth about the mysterious egg man who lives next door. Only the strongest will survive in this tale of individuality, love, and mutilation.

The Egg Man is a Bizarro Fiction novella by Carlton Mellick III.

Has nothing to do with the Beatles song or Doctor Ivo Robotnik.

This novella contains example of the following Tropes: