The villains from Peter Jackson's The Lord of the Rings and The Hobbit film trilogies that are not directly in league with the Big Bad Sauron.
open/close all folders
Smaug
See Smaug
Advertisement:
Gollum 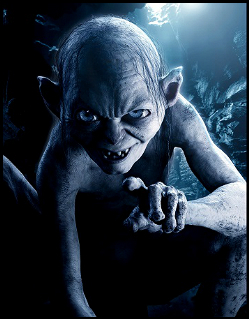 "Oh! We knows! We knows safe paths for hobbitses! Safe paths in the dark... Shut up!"

Appears in: An Unexpected Journey | The Fellowship of the Ring | The Two Towers | The Return of the King

"They cursed us. Murderer they called us. They cursed us, and drove us away. And we wept, Precious, we wept to be so alone. And we only wish to catch fish so juicy sweet. And we forgot the taste of bread... the sound of trees... the softness of the wind. We even forgot our own name. My Precious."
Once a Stoor hobbit named Sméagol living in the hobbits' original home along the Great River Anduin, he murdered his cousin Déagol on his birthday after Déagol found the One Ring and refused to give to Sméagol as a present. Sméagol was then exiled. To deal with the stresses of exile, Sméagol's personality fractured, creating the creature known as Gollum, for the hacking cough he developed. Gollum, unlike Sméagol, was cruel, ruthless, twisted and manipulative, but allowed them to survive in the goblin-infested Misty Mountains. Eventually, Bilbo Baggins encountered Gollum as he trekked eastwards on the Quest of Erebor. Bilbo stole the One Ring, and beat Gollum in a game of riddles. Many years later, Gollum, hoping to reclaim the Ring, followed the Fellowship on their journey, starting in Moria. After the breaking of the Fellowship, he ambushed Frodo and Sam as they continued alone, but was captured and eventually served as their guide to Mount Doom. Despite the reemergence of the more decent Sméagol personality, he could not resist the lure of the Ring, and eventually attempted to lead Frodo and Sam into Shelob's clutches, so he could take the Ring from their bodies, but was killed when he attempted to take the Ring one last time at the Crack of Doom.
Three Trolls

"Nothing wrong with a bit of raw Dwarf! Nice and crunchy!"

Appear in: An Unexpected Journey | The Fellowship of the Ringnote as statues

Three trolls from the Ettenmoors that the Company encounter in the Trollshaws west of Rivendell. Extremely stupid, they attempted to eat the Company, but fail due to Bilbo's stalling, a smidge of Gandalf's magic, and sunlight.
Stone-Giants

Appear in: An Unexpected Journey

A race of giants living high up in the peaks of the Misty Mountains near the High Pass.
The Great Goblin 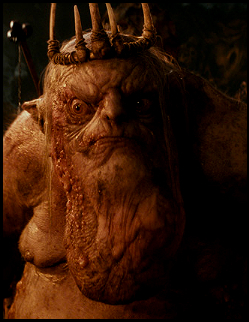 "Bones will be shattered, necks will be wrung! You'll be beaten and battered, from racks you'll be hung! You will die down here and never be found, down in the deep of Goblin Town!"

Appears in: An Unexpected Journey

A powerful Goblin chieftain of Goblin-town. Surprisingly personable and snarky for a goblin.
The Goblins of Goblin-Town 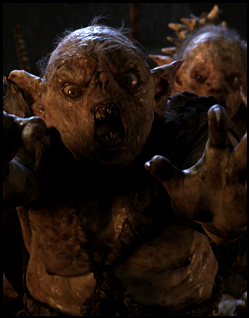 Appear in: An Unexpected Journey

The countless inhabitants of Goblin-Town and the Great Goblin's minions.
Advertisement:
Were-Worms

Appear in: The Battle of the Five Armies 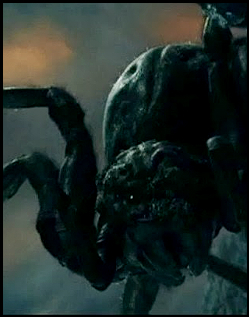 "She's always hungry. She always needs... to feed. She must eat. All she gets is filthy orcses."

Shelob was one of the countless brood of Ungoliant, a Great Spider and a relic from a time before Sauron's Shadow. She was the greatest of Ungoliant’s spawn, many times larger than even the largest of Mirkwood's spiders. A purely neutral character, she only served herself, and her hunger and bloodlust would be satisfied by any creature she could consume.
The Spiders of Mirkwood

The Spiders of Mirkwood

Appear in: An Unexpected Journey | The Desolation of Smaug

Some of the countless brood of Ungoliant who are nesting in Dol Guldur and spreading through Mirkwood.
The Watcher in the Water

The Watcher in the Water 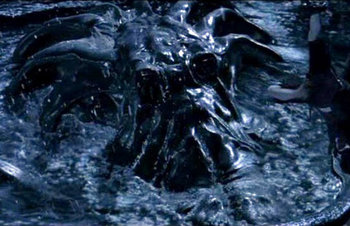 An aquatic monster that guards the western gates of Moria. It encounters the Fellowship upon their arrival to the walls of the dwarven realm, possibly awakening from a stone thrown to the water, and tries to abduct Frodo with its tentacles before being shot away by Legolas. It then crushes the doors of Moria behind them, leaving them trapped in Moria.
The Balrog 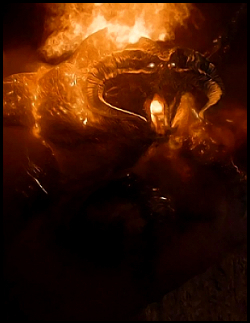 Appears in: The Fellowship of the Ring | The Two Towers

"You fear to go into those mines. The dwarves delved too greedily and too deep. You know what they awoke in the depths of Khazad-dûm; shadow and flame."
— Saruman
A Balrog of Morgoth, a monster of the First Age, awoken by the dwarves in their delvings beneath Khazad-dûm, who killed Durin VI and drove the dwarves from their oldest and greatest realm. Encountered by the Fellowship as they leave Khazad-dûm. Slain by Gandalf in a titanic battle that began at the lowest abyss of Moria and ended on Durin's Tower, its highest point.
Advertisement:
The Goblins of Moria

The Goblins of Moria 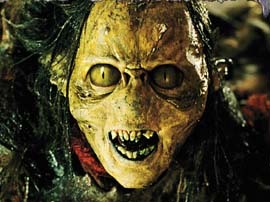 Appear in: The Fellowship of the Ring

"They have taken the bridge and the second hall. We have barred the gates but cannot hold them for long. The ground shakes, drums...drums in the deep. We cannot get out. A shadow moves in the dark. We cannot get out.... They are coming."
— The last entry in Ori's Book of Mazarbul
The countless inhabitants of Moria and minions of Durin's Bane.
The Cave-Troll of Moria

Appear in: The Fellowship of the Ring

"They have a cave-troll!"
— Boromir
A cave-troll employed by the goblins of Moria to attack the Fellowship.