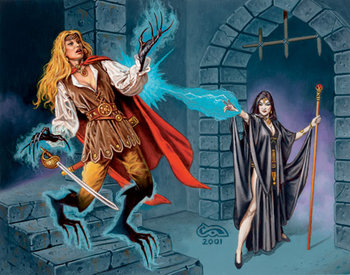 Vanity, like fashion, is a harsh mistress. Beauty fades with time after all, but then there are times that it's taken away before time even has a chance to. Whether because of an accident, curse or illness this character loses their extreme good looks and becomes ugly as sin.

Which is rather appropriate, considering that since Beauty Equals Goodness most characters who suffer this will do a Face–Heel Turn, or if already a villain constitutes a Freudian Excuse for even worse villainy to "get back at the world" that did this to them/mocks them. Of course if this happens to a Jerk Jock or an Alpha Bitch - or simply a physically attractive Butt-Monkey - it may all be played for comedy and be undone by episode's end.

This is named for the fable of "Beauty and the Beast", and since then this trope is closely associated with the Aesop of the vain losing their beauty for boasting of it, and only getting it back if they become humble.

Often leads to a "My face! My beautiful face!" moment, should the villain be a large enough ham. Expect them to go and break every mirror they come across.

Compare the more extensive and Laser-Guided Karma related Karmic Transformation, or even more generally, Baleful Polymorph. See also Broken Angel, What Have I Become? and Emergency Transformation. Contrast Gorgeous Gorgon. Very likely to happen to the Vain Sorceress, since it's her worst fear. If this is self-inflicted, then it's Tarnishing Their Own Beauty.

Also related to I Just Want to Be Beautiful as the most likely reaction to losing beauty. See also Power-Upgrading Deformation for a silver lining to this fall from grace.