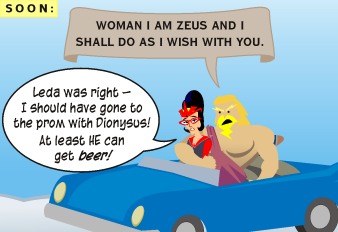 Gods are powerful, and back in the old days they generally considered morality to be a quaint little custom that was not their style. When they weren't partying up at Mount Olympus or playing Russian Roulette with thunderbolts, the Greek Gods could be found making out with mortals, resulting in the birth of demigods. Unfortunately, they often didn't wait for consent, or indeed even care. This comes from two rationales:

In myth, there are conflicting accounts of many of these examples. A story of a god's relationship with a mortal woman can be interpreted in one way as a sexual predator assaulting a woman, and in another as a game being played by two lovers, Depending on the Writer and the interpreter. In addition, some ancient Greek sources don't differentiate seduction and rape, leading to interpretations that all gods never had consent, even in stories where the god is the one seduced.

There were many ways in which the gods of old would "know" desirable mortals. These can generally be divided into two types:

In case you're wondering, mortal women were far from being the only targets of not-so-holy intentions of the gods; many goddesses — and not a few gods, for that matter — were known for doing the same thing to mortal men.

This trope applies not just to gods, but also to demigods and others with Divine Parentage. It is a staple of Greek Mythology. Nowadays, it's mostly a Forgotten Trope. Compare Muggle in Mage Custody, which is when a supernatural entity holds a mortal in captivity (with or without romantic subtext), and which is also something of a double standard (just like rape, it would be a criminal offense if an ordinary human did it to another, but is often considered normal and just when a magician or a god does it to a human). See also Double Standard: Rape, Sci-Fi. When the relationship is less one-sided, that's Divine Date.

Zeus has one of the largest if not the largest number of "relationships" of this kind of any deity in world history. It should come as no surprise, then, that The Moons of Jupiter—of which there are at least 67—are named for his lovers (including "lovers") and descendants. We should note that all of his "relationships" with women produced children—generally sons, and most especially heroes. Many of these went on to become kings and ancestors of the peoples of Greece, so one really gets to thinking...

Historians believe that a major part of Zeus going after so many women was that when the ancient Greeks conquered their neighbors, they tended to conflate the local gods with Zeus and to turn those gods' consorts into Zeus's lovers. Others believe that the Grecians believed it because frankly, life can get pretty boring when you're an invulnerable god with nothing to do but drink ambrosia and throw around thunderbolts all day.

Literature
Live-Action TV
Religion and Mythology
Web Comics
Well, obviously we have a rapist on Mount Olympus. He's climbin' in yo' windows, he's snatchin' yo' people up, tryin' to rape 'em. So y'all need to hide ya' kids, hide ya' wife, and hide ya' husband, 'cause they rapin' e'rybody out here.