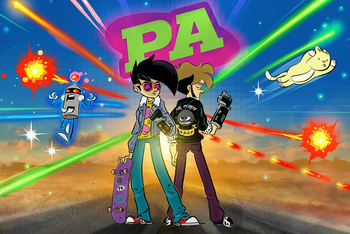 is a Gaming Webcomic, created by Mike "Gabe" Krahulik (art) and Jerry "Tycho" Holkins (writing) and updating on a Monday-Wednesday-Friday schedule. From its humble beginnings in late 1998, the comic has inspired countless imitators and grown into a veritable household name; the franchise has its own convention (PAX

), as well as several commissions.

Although most of the comics are connected to Video Games in some manner, it is not exclusively a gaming comic; much of the humor is drawn from real-life experience, as well as character interaction, both with the authors' alter-egos and with their friends.

The series has spun off multiple other projects, including:

Krahulik and Holkins were chosen for Time Magazine's list of Top 100 Influential People for their 2010 issue under the "Artists" category.

Tycho has starred along with Strong Bad, The Heavy, and Max in a poker game named Poker Night at the Inventory, and the Fruit Fucker 2000 appeared (renamed Juice Bot) in the Steam version of Monday Night Combat. The Merch

is now an unlockable pet in the game Fire Fall.

The Cardboard Tube Samurai was available as a promotional Survivor for CMON's Zombicide for backing the Kickstarter campaign or attending the PAX convention. Gabe and Tycho also appear as Kickstarter exclusive players for CMON's Kaosball.