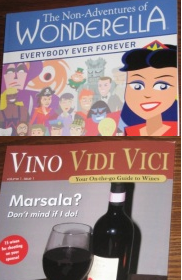 Both the same book.
"Since a good sum of Wonderella's readers aren't "comic book fans" in the Green Lantern sense, I have dedicated the back of the book to Vino Vidi Vici: The On-the-go Guide to Wines. Flip it over when guests, dates or in-laws stop by and they'll be none the wiser (Don't worry, nobody actually reads coffee table books)."
— Justin Pierce
Advertisement:

You know that there are some books that people think you should not read, books where the simple act of reading them constitutes a hazard to life or liberty? But we're not talking about censorship.

No, this is a case of the book's very author deciding that reading his book in public is dangerous. The very people who put pen to paper (or finger to keyboard) have decided that it is irresponsible to send you into the world with a copy of their works without some way to keep you safe. They like to give you the idea that you will need some kind of disguise for your book and so provide one in a sort of factory-installed Book and Switch.

You can pull this off with either a hardback or a paperback book, but the method varies. Hardback books are published with a reversible dust cover with an alternative title and cover image on the inside. A paperback has an alternate cover on the back of the book. In both cases, the alternate cover is usually something along an opposite line to the real cover.

Compare Book Safe, which is when the cover is used to conceal something that isn't a book. Also compare Boss Button.