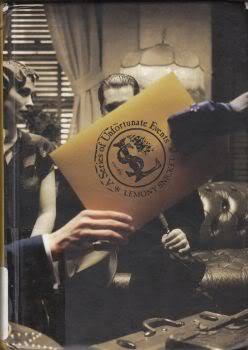 Lemony Snicket, Author and Fugitive
This obituary is filled with errors - most importantly - I AM NOT DEAD!
— L. S.
Advertisement:

Lemony Snicket: The Unauthorized Autobiography is one of the supplementary materials for A Series of Unfortunate Events.

The story begins with a packet of information on reclusive author and fugitive Lemony Snicket changing hands from the aunt of a gentleman, to aforementioned gentleman, to another gentleman as he has no nieces or nephews, to a woman, to a doorman, and then to the people who later gave it to Daniel Handler, who gives the introduction to the Autobiography.

Divided into thirteen chapters titled with questions, which are promptly scratched out and replaced with more relevant (though less illuminating) questions, it does not directly answer them. However, it does offer a lot of behind-the-scenes information on Lemony Snicket and the V.F.D. as a whole. As it was published before the completion of A Series of Unfortunate Events, yet dropped several well-buried hints, extremely careful readers were spoiled for the end of the series.