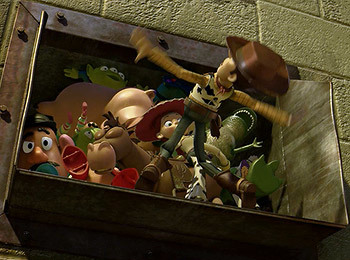 "Come on down. But not all at once."
Advertisement:

An Amusing Injury trope, where a group of characters running along stop just short of the cliff, or the edge of the pool, or the pit of deadly spikes.

And then....along comes the slowpoke, who doesn't manage to stop in time (or at all).

Sometimes found without a distinct pause between second to last and last stacker. May or may not work with stationary people/objects being knocked over a cliff or otherwise lost inadvertently. May or may not work where everyone stops, and then the cliff breaks or a similar accident sends them over.