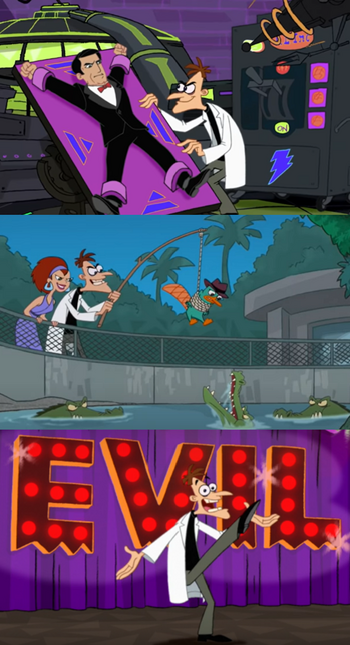 Just an average day for Dr. Doofenshmirtz.
Smithers: And when [Mr. Burns] tried to steal our sunlight, he crossed that line between everyday villainy and cartoonish supervillainy.
Dr. Colossus: Bah! He was a rank amateur compared to... Dr. Colossus!
— The Simpsons, "Who Shot Mr. Burns?"
Advertisement:

So you want to become a supervillain. Here's a handy guide to accomplishing this, in several easy steps!

There is one thing you must never, ever do to be a true Cartoonish Supervillain:

This doesn't mean you have to fail at every step of your plan, because it's a well known fact that You Can't Thwart Stage One. You'll probably get to rob the bank or build the Doomsday Device, and you usually get to escape when it goes pear-shaped. But beyond that, you're pretty much screwed. Don't forget to shake your fist, swear you'll be back and never re-use any of your old plans. It's all part of the supervillain flair.

Warning: If you somehow end up in a Post-modern work, expect sudden success, but also expect to face lots of real-life consequences of actually leading a criminal organization or villainous movement. Then again, you might end up on top due to people feeling that Evil Is Cool, so enjoy it while it lasts.