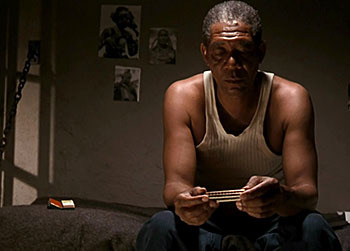 Nobody knows the trouble I seen. Except for this little beauty.
[prisoner plays harmonica]
Homer: That's sorta nice. What're you in for?
Prisoner: Atmosphere.
— The Simpsons, "One Fish, Two Fish, Blowfish, Blue Fish"
Advertisement:

When various characters are trapped or held captive (say, during a jail scene) the harmonica may be played, as Background Music if not by an actual character. It's also done in isolation, such as being stranded or lost in the wilderness. Or just camping or boredom, which borderline qualifies as the previous. Sometimes associated with Wild West or Deep South settings.

Often Truth in Television, as harmonicas are among the few musical instruments to find their way in from "outside", either smuggled in as contraband or simply allowed in by the guards. And when you have that much empty time, you may as well learn to play it, and learn to play it good.

See also Brig Ball Bouncing, another pastime used to illustrate a character trying to fill in empty time while in confinement or prison.

Rachel is not handling being snowed in well.

Rachel is not handling being snowed in well.