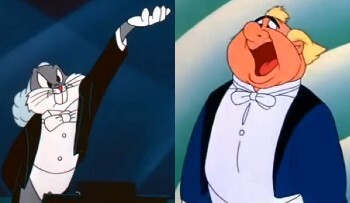 In Real Life, conducting an orchestra is a highly stylized endeavor. A conductor has to make sure the orchestra plays in the correct tempo, and that important soloists come in on time. They are also generally responsible for setting the entire tone, speed and style of the piece being played. They do so through the swinging of a baton and through the use of meaningful and highly nuanced gestures. It is up to the members of the orchestra to interpret the movements and follow along with the tempo set by the conductor.
Advertisement:

Of course, in cartoons, things run a little differently. Conductors, instead of merely guiding an orchestra, have the godlike ability to create sound through the merest flick of their hands — as if THEY were the source of the music, not the orchestra. Instead of using their batons to indicate the beat patterns that an orchestra should follow (as most Real Life conductors do), a cartoon conductor will simply wave the baton around in a spasmodic, dramatic — and completely random — fashion and music will miraculously appear. If the conductor stops moving, the music will stop abruptly as well (as if someone had hit the "pause" button on the orchestra). Woe betide the concert players if an annoying fly gets in the way.

Perhaps the most ridiculous example of Cartoon Conductor Omnipotence occurs in instances where the conductor's sheet music gets switched on him (without his notice) in mid-performance. Within seconds, the orchestra will stop playing "The 1812 Overture" and start playing "Take Me Out to the Ballgame", leaving the hapless conductor to wonder what's going on, and why all the notes on his sheet music suddenly look different. Of course, it would make perfect sense for an orchestra to switch songs if all of the sheet music for all of its members had been instantaneously changed, but in most cases, it's only the conductor who gets the old switcheroo pulled on him. How each individual member of the orchestra could possibly know what notes to play just by watching him is never adequately explained.