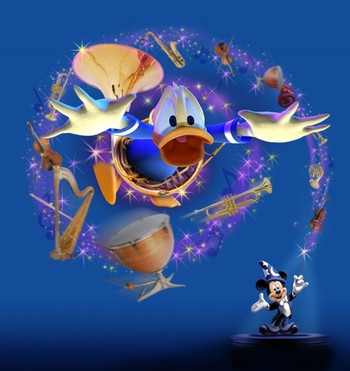 Mickey's PhilharMagic is a 3D Movie attraction created for the Disney Theme Parks that debuted in 2003 at the Magic Kingdom park, 2005 at Hong Kong Disneyland and 2011 at Tokyo Disneyland. It premiered in autumn 2018 at Disneyland Paris as part of the Mickey 90th Anniversary celebrations, and later premiered in April 2019 at Disney California Adventure replacing Muppet*Vision 3D (which had previously been repurposed as a center for Disney film previews in 4-D, as well as for a Frozen singalong; in truth, PhilharMagic was originally intended to replace the Muppets in 2010, before Disney realized the screen was too small to present it in the intended aspect ratio, which they eventually got around by projecting the outer bands on the theater walls; the DCA version originally had a static Donald figure at the very end instead of one that kicks its legs and falls into the hole since they apparently never removed the Swedish Chef animatronic. Around September 2019, a moving animatronic was added).

A Spiritual Successor to Magic Kingdom and Tokyo's The Mickey Mouse Revue, Mickey's PhilmarMagic is set inside the Fantasyland Concert Hall, where Mickey Mouse is conducting his PhilarMagic Orchestra with the help of the Sorcerer's Hat. While Mickey goes off to attend to last-minute details, Donald Duck decides to use the hat to try conducting himself, only to be sucked into various musical numbers from Beauty and the Beast, Fantasia, The Little Mermaid, The Lion King, Peter Pan, and Aladdin — ultimately having to be bailed out by Mickey.

A collaboration between Imagineering and the Walt Disney Animation Studios, the attraction is notable as one of the early experiments in rendering Mickey and other classic characters as CGI characters in the midst of the Executive Meddling going on at the studio, when the plan to drop hand-drawn animation altogether was being discussed. The attraction also features Clarence Nash reprising his role as Donald Duck posthumously through the extensive use of stock audio.