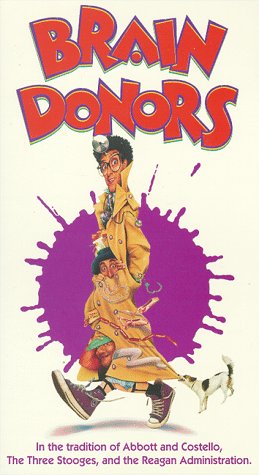 Brain Donors is a 1992 comedy film produced by David and Jerry Zucker and released by Paramount Pictures. It is a modern remake of the Marx Brothers' A Night at the Opera, starring John Turturro, Mel Smith, and Bob Nelson as the Expy Marxes.

The plot begins when Lillian Oglethorpe uses the fortunes of her recently-deceased tycoon husband to start a ballet company in his name. Through some fast-talking shenanigans, Ambulance Chaser Roland T. Flakfizer (Turturro) is appointed director of the company, over Mr. Oglethorpe's attorney Edmund Lazlo. With the help of taxi driver Rocco Melonchek (Smith) and handyman Jacques (Nelson), Flakfizer tries to build up the company while pairing up star-crossed dancers Alan Grant and Lisa Le Baron. They are opposed by Lazlo's efforts to discredit Flakfizer and take control of the company for himself, while the egotistical international ballet star Roberto “the Great” Volare has his own eyes on Lisa.

As you might expect given the pedigrees involved, much, much Hilarity Ensues. Unfortunately, due to petty infighting, the movie was released without any publicity and a handful of home video releases, and remains almost completely ignored by Paramount to this day.