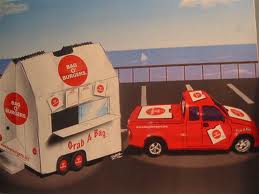 Sometimes The Little Shop That Wasn't There Yesterday has a very good reason for disappearing and reappearing at will: it has a motor!

A Mobile Kiosk would be any device where the owner sells something with the additional benefit that when business dries up he can pick up and move. Perhaps a conman with a collapsible table, a bazaar merchant with his store on a cart, or a hoverskift selling fresh alien fish. See Travel Cool for more odd vehicles such as Fruit Carts.