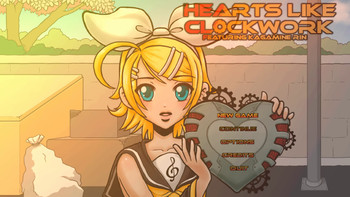 Hearts Like Clockwork is a RPG Maker MV and Vocaloid fangame by Kayako Amaya, the developer of Corruption of Laetitia. A short demo was released in 2020.
Advertisement:

In 2209, humanity created robots based on Isaac Asimov's three laws of robotics, but for the sake of military conquest, they started making robots that ignored the first law. The most advanced nations were destroyed by their own out-of-control robot armies while the other nations had to disarm their AI-controlled weaponry and disable their network. While the smaller nations survived, they lost all contact with the outside world. In 2291, the network still hasn't been restored, but civilization still exists. Rin Kagamine, a class president of Crypton High School, enjoys school life with her friends, but soon discovers that the robot war never really ended.