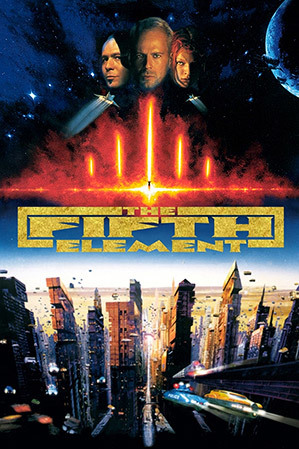 "You no trouble. Me... fifth element... supreme being... me, protect you."
— Leeloo
Advertisement:

The Fifth Element is a 1997 English-language French Science Fiction Film produced by Gaumont. The brainchild of producer, director and screenwriter Luc Besson, it stars Bruce Willis, Gary Oldman, Milla Jovovich, Chris Tucker and Ian Holm. The soundtrack was composed by Besson's longtime collaborator, Éric Serra. It was released by Columbia Pictures in North America, while in France it was released by Disney under Gaumont Buena Vista International.

The movie opens in 1914, in an Egyptian temple, where an archaeologist, assisted by a reporter, discovers hieroglyphs that report about a Great Evil that is unleashed and tries to destroy all life every five millennia, and the weapons to defeat it: four stones representing water, fire, air and earth and a "perfect being" representing a fifth element sealed in a sarcophagus. A priest on site seems incredibly disturbed that the discovery is being made, going so far as to (unsuccessfully) poison the archaeologist to prevent the discovery.

Just as the discovery is made, the Sufficiently Advanced Aliens who made the temple in the first place (and whom the priest, and all those who have come before him, have secretly served) arrive in a giant spaceship and take away the stones and the sarcophagus, explaining that they are unsafe because of the imminent war on Earth. The aliens also order the priest to continue to take care of the temple and to pass on his knowledge, as it was passed on to him, to prepare for the Great Evil's incoming. The priest points out that they're leaving Earth defenseless, and the aliens reply that when the Great Evil returns, so shall they. Cut to...

2263, when the Great Evil is starting to form itself. On their way to deliver the five elements back, the aliens are shot down by a ship of another race of proud warrior aliens, who steal the box which would contain the stones. The remains of the "fifth element" are found and Earth scientists reconstruct it, generating an orange-haired Mysterious Waif named Leeloominaï Lekatariba Lamina-Tchaï Ekbat De Sebat, or "Leeloo" for short, who breaks out of the lab and dives into a taxi driven by ex-soldier Korben Dallas. With the Great Evil getting closer, Korben has to help Leeloo save the planet.

The Fifth Element provides examples of:

Zorg has one surprisingly early when the Mangalores fail to deliver the stones.

Zorg has one surprisingly early when the Mangalores fail to deliver the stones.