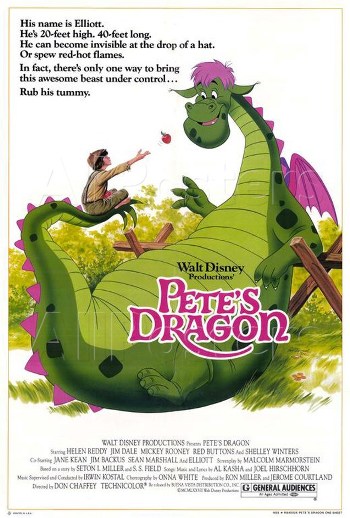 Pete's Dragon, a 1977 Disney film, is another Spiritual Successor to Mary Poppins, though not as direct a successor as Bedknobs and Broomsticks was. It's a live-action musical that uses cel animation to bring its title character to life.

It stars Sean Marshall as Pete, Helen Reddy as Nora, Mickey Rooney as Lampie, Jim Dale as Doc Terminus, Red Buttons as his sidekick Hoagy, Shelley Winters as Lena Gogan, and Jim Backus as the mayor of Passamaquoddy.

It is the early 20th century, and Heartwarming Orphan Pete is on the run from the cruel Gogans, a backwoods family that bought him to be their slave. He has but one friend: Elliot, a friendly dragon. Elliot doesn't speak English, but he can fly, breathe fire, and turn himself invisible; most of all, he's got Pete's back. Together they arrive in the town of Passamaquoddy, Maine.

No one there believes in dragons, of course, and because Elliot's usually invisible, his faithfully following Pete around causes a lot of problems for the kid, which are sometimes exacerbated when Elliot tries to protect him from unjust punishment. Still, Pete is taken in by Nora, a lighthouse keeper's daughter (her dad, Lampie, is the one person in town who has seen Elliot, but no one believes him because he's the town drunk), and Elliot hides out in a nearby cave.

Pete soon bonds with Nora and Lampie, and even tells Elliot about Nora's lost-at-sea fiance in hopes the dragon can find him. Alas, Snake Oil Salesman Doctor Terminus, played by Jim Dale, arrives in town and learns from his lackey Hoagy (whom Lampie takes to the cave to prove his claim) about Elliot. The parts of a dragon supposedly can be compounded into all kinds of medicines, so Terminus seeks to capture Elliot. Then the Gogans arrive, and the two evil parties meet and combine their forces. It all comes to a head on a stormy night that will be rife with rescues.