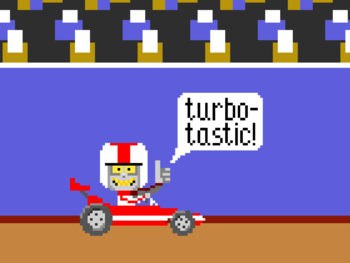 "Yu-Gi-Oh is sponsored by Yugi-O's. They're Yugi-licious. Wait a minute — 'Yugi-licious?' Is that even a word?"
— Yami Yugi, Yu-Gi-Oh! The Abridged Series
Advertisement:

A variation of Absolute Comparative that shows up mostly in children's commercials. An advertiser uses completely made-up adjectives to describe their product. Whether this invokes Totally Radical or Weasel Words is up to the reader.

Portmanteaus with "delicious", "terrific", and "fantastic" see the most use; it's easy to append -icious, -ific, or -tastic to the end of any other word. This trope is often paired with Lite Crème.