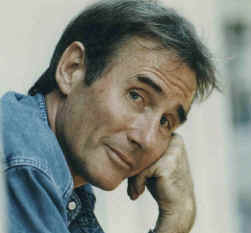 "It's a little like casting out hundreds of fishing lines into the audience. You start getting little bites, then more, then you hook a few, then more. Then you can start reeling them in and that's a loveliest feeling - the whole audience laughing with you."
Advertisement:

Jim Dale MBE (born James Smith, 15 August 1935 in Rothwell, England) is an English actor and comedian, known for appearing in some of the Carry On films, being the narrator for the American releases of the Harry Potter audio-booksnote Stephen Fry narrates the UK versions and appearing in many Disney films and other US dramas. He started in stand-up in his late-teens, before appearing in a small role in a Peter Rogers/Gerald Thomas film alongside Kenneth Williams, before appearing in their later-made Carry On Cabby and other Carry On films, eventually appearing in 11 of their movies. In between the films, he did voicework on the radio for about a year in the 1960s, as well as writing songs for many music acts and recording some music himself that did well in the UK and US charts, earning him an Oscar Nomination and an International Laurel Award for the song "Georgy Girl" in 1966.

Dale has also done lots of stage work, appearing in many musicals in the West End and Broadway, eventually bagging Tony Award wins and nominations throughout the last 40 years, and still going strong. He also appeared in the Disney films as the lead in Hot Lead and Cold Feet and the antagonist of Pete's Dragon (1977) in 1977. He has become known as the "voice" of Harry Potter, because of his audio recordings of the novels, as well as his voice appearances on many of the video games, which earned him several North American audio-book and children's literature awards, and a World Record for voicing 134 characters on an audio recording. Since then, he has continued to do audio recordings for children's books, mostly back in the UK, as well as receiving an MBE in 2003 for promoting children's literature.

The Tropes Were These...