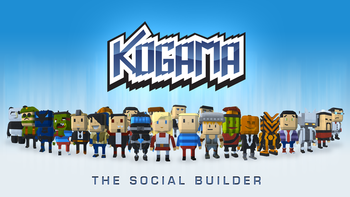 Kogama is a user-based MMO Wide-Open Sandbox launched in 2011 and developed by Danish company Multiverse APS. In this game, you can build worlds and play on other people's maps.

This MMO is notable for being an alternative to Minecraft and Roblox.

As a building MMO that has evolved greatly since its inception, there are many tropes to be found in this game: