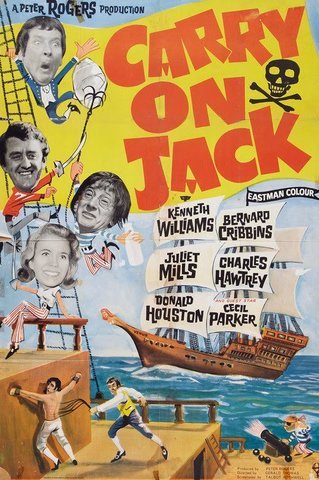 "What's with all that jigging in the rigging?"
—Captain Fearless
Advertisement:

Carry On Jack is a 1963 film and the eighth in the Carry On series starring Kenneth Williams, Bernard Cribbins, Juliet Mills, Charles Hawtrey, Donald Houston, and Cecil Parker - one of the most obscure casts in a Carry On as only Williams and Hawtrey were regulars, Cribbins only appeared in two more after this, and Mills, Houston and Parker were never used again.

This movie is set in the years post-Battle of Trafalgar, where Horatio Nelson (Jimmy Thompson) was killed. On his deathbed, he demands to have a bigger navy with better naval ships, right before he says his famous last words of "kiss me" to Hardy (Anton Rodgers). With the Royal Navy being rather successful in many naval wars many years later, and managing to get into a war with the French and the Spaniards, keen mild-mannered sailor Albert Poop-Decker (Cribbins) is promoted in the navy to midshipman by the First Sealord (Parker), despite his lack of experience and his time training unsuccessfully for over 8½ years.

Assigned to board the ship Venus in the morning, Albert stays in a seaside inn where he is mugged for his clothes by the beautiful inn employee Sally (Mills), who intends to find her long-lost childhood crush Roger (Peter Gilmore) on one of the maiden voyages. Then the grumpy Lieutenant Jonathan Howett (Houston) and his gang of press-gangers shanghai Albert and clueless cesspit cleaner Walter Sweetley (Hawtrey) onto the ship Venus, which is led by the blithering Captain Fearless (Williams).

With no proof of being assigned onto the ship, and the disguised Sally using her witty tactics to stay undercover, Albert and Walter experience the hardships of being a part of the British Royal Navy. Hilarity Ensues.